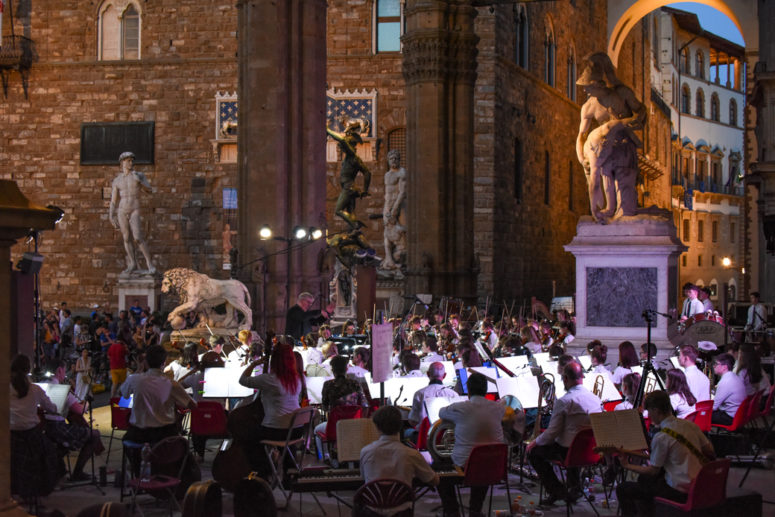 BLOG – Breakfast was a little later today for some. But for the youngest player on tour, it was time to show that he had another string to his bow! Kinross High School’s Munro Strachan has been passionate about more than music in recent years. He chose today to take part in his 100th Parkrun – a 5km event in the beautiful grounds of Tettuccio Spa, just 10 mins from the orchestra’s hotel. Despite the heat, Munro completed his run in style, with echoes of the previous evening’s Perugia concert still ringing in his ears.

Meanwhile, the rest of the orchestra took the opportunity to relax before their next concert which was on a platform, and in a setting, that few could have predicted.

The orchestra’s tour guide, Tony Pelaggi, set the event in context for them.

“Tonight, you are performing as the main event in an international Festival of Youth Orchestras, on the oldest and most famous platform in Florence, the Loggia dei Lanzi, in the Piazza del Signoria, one of the greatest squares in the world.”

The Loggia dei Lanzi is a stone terrace on the south side of the piazza built around 1380 to house public ceremonies of the Florentine Republic. The Loggia became an expression of the Medici family power in the region. Today it is an open-air sculpture gallery, with its open air collection of antique and refined Renaissance art protected 24/7 by armed guards.

Once again the orchestra’s coaches parked as close to the venue as possible, thanks to their special Festival permits. The instrument vans appeared in the piazza and unloading was again great team effort.

It was still hard to take in the enormity of what was about to happen. The signs were there if you knew where to look. The Royal Scottish National Orchestra drivers, who had once again volunteered their services and their truck to ship PYO’s equipment, had knowing smiles as they set the stage. So too on the face of tuba player, Andy Duncan, a seasoned professional ‘on loan’ to PYO from the BBC Scottish Symphony Orchestra. He could be seen walking around the platform staring up and outwards with a look of sheer incredulity. He too knew that it was going to be something really special.

There was hardly any time for the players to find their way to the famous sights – the Duomo or the Ponte Vecchio and the other treasures in the city. Tonight they were bringing their own talent to the city – surely the greatest of all treasure.

The sound and lighting technicians made ready as the orchestra rehearsed. Even the lightest string sound was sure to carry to the far side of the piazza. Throughout the rehearsal, each soundbite was being cheered by lively crowds. Perth Youth Orchestra had become their own warmup act and they were loving it. It was so much fun that the rehearsal overran slightly, leaving just enough time for a quick change of clothes before the concert began.

Festival Orchestre Giovanili’s (FOG) Ilaria Ippoliti welcomed the orchestra on its return to Florence. It had first performed there in 2013, on the orchestra’s own 50th birthday. Now it was PYO’s turn to congratulate the Florence Festival Festival on its coming of age, celebrating its 21st anniversary this year.

Tour Coordinator, Mr Andrew Mitchell said, “We were delighted to be invited to take part again this year, and not only on the main stage but also with top billing on the Saturday night.”

“FOG attracts an international field of young musicians for its 8 week summer festival. Some, like PYO, perform their own programme of works, whilst others combine with groups from across the world to give joint concerts. This year, Perth Youth Orchestra featured on the Festival syllabus along with orchestras from Estonia, Norway, Austria, France, Germany, Belgium, the Netherlands, Italy and the USA. This year PYO was the sole representative of all the youth orchestras from across the UK – reflecting strongly on the success of Perth and Kinross’ Instrumental Music Service and the huge work of its tutors, under the direction of its coordinator, Mr Allan Young.”

The curtain raiser was, once again, the Triumphal March from Verdi’s Aida. The players showed that they had quickly mastered the very grand outdoor accoustic. As the sun set on the city, the warmly floodlit buildings encircled them as they played. Holst’s St Paul’s Suite brought back happy memories, not just because of the composer’s long service as a music teacher at St Paul’s Girls’ School in London for whom the composition was written; but also memories of a former PYO player, Helen Neilson, who teaches in that same school presently.

The spectacular Ziek Percussion Concerto, performed by Guy Bathgate, somehow overpowered the presence of the gruesome and grotesque Renaissance sculptures surrounding him. The orchestra’s newly purchased 5-octave marimba had arrived just the day before the instruments set off on their journey from Scotland. At the hands of this masterful soloist it was clearly a very worthwhile investment.

The orchestra then performed the Jazz Orchestra Suite No. 2 by the Russian composer Dimitrij Shostakovich, a well-known work which became famous as the soundtrack to Stanley Kubrick’s film ‘Eyes wide shut’.

The official programme concluded with Miss Saigon, its music by Claude-Michel Schönberg was based on Puccini’s, Madame Butterfly. A visit to the walled town of Lucca, birthplace of Puccini, was on the orchestra’s itinerary earlier in the week.

The orchestra chose the greatest Showman, by the American Benj Pasek and Justin Paul as their final encore. Clearly a firm favourite with the orchestra it also brought obvious delight to the packed Piazza.

…and so to our final concert.