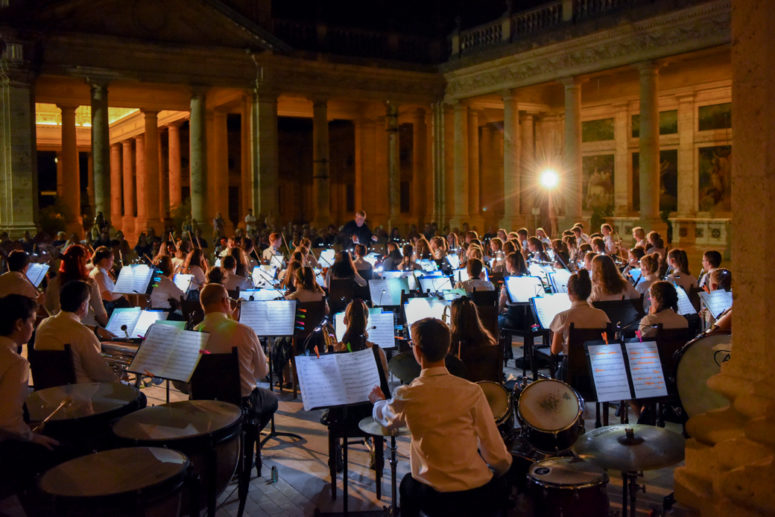 Tuesday (2nd July) – Perth Youth Orchestra’s 2019 concert tour saw it return to Italy and many of the popular locations which had been highlights of its 2013 Golden Anniversary trip. The orchestra moved smoothly between Heathrow’s Terminal 5 and Terminal 3, with none of the unplanned drama they had faced in 2007 on the way to Poland.

The outward journey involved a few of the staff and players traveling on variety of different routes – via Newcastle, Spain and Peru! Four members of the orchestra joined it directly from their very own successful concert tour to Barcelona with the Fair City Singers. Thankfully, all arrived safely.

Wednesday (3rd July) – All the players were reunited with the instruments which had traveled from Scotland – thanks once again to the Royal Scottish National Orchestra who lent us their truck and its crew.

The ancient walled city of Lucca – with its walls dating from 300BC – was our first excursion. Its narrow shaded streets providing a welcome break from the searing 38°C heat.

At the heart of Lucca there is the site of an amphitheatre, originally built to accommodate 10,000 spectators watching gladiator and animal fights, and other spectacles.

A short walk to the Piazza San Michele and time to explore the Chiesa di San Michele in Foro, the ancient walls, Puccini’s birthplace – and then to sample some local ice cream before returning to Montecatini Terme for our first concert on tour.

The beautiful Tettuccio Spa was the setting for the first full orchestra concert. In order to deliver the orchestra’s larger instruments to the venues a relay of small vans and their drivers were needed. PYO set up and rehearsed at the open air setting as the sun set behind them.

The classical columns of the Spa were floodlight as the opening notes of Verdi’s Aidi Overture announced the orchestra’s arrival in Italy.

Holst’s St Paul’s Suite gave the string section the chance to explore the rich acoustic. It is said that Holst must have had an exceptionally talented solo violinist under his wing since the solo violin part in the Intermezzo demands such a high degree of musicianship. PYO leader, Ola Stanton, proved herself more than capable with a beautiful musical line and a great surety of playing right into the high-register conclusion.

In the final movement, a whirlwind of traditional airs culminated in the ever familiar sound of Greensleeves.

A mountain of percussion instruments lay in front of the orchestra for a performance of Ziek’s Concerto. PYO has a long tradition of finding its own soloists – with its own players auditioning for the role in early March. Guy Bathgate’s successful audition sent the rest of the orchestra scurrying to learn their equally demanding score which clearly they now love.

Guy Bathgate demonstrated his great mastery on a variety of instruments, including marimba, vibraphone, bells, and crotales and a large percussion battery with two snare drums, multiple toms, brake drums, and bass drum. In a setting resembling a Roman Temple it was only fitting that the God’s echoed their approval with the sound of distant thunder.

Shostakovich’s Jazz Suite No.2 delighted the very appreciative audience, bringing them to the edge of the seats, swaying to the sounds of the dance and the lyric waltz. It was an assured performance and a fitting opening to the orchestra’s week in Tuscany and beyond.

Time still for Leroy Anderson’s Buglers’ Holiday – with Jenny Whitaker, Jess McFarlane and Cameron Wilkinson on trumpets – and as a finale with themes from the Greatest Showman, a obviously a firm orchestra favourite!

and so to our next concert.….