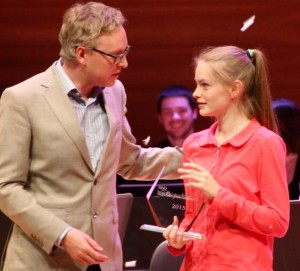 Scotland’s national orchestra’s first composition competition, Notes From Scotland, specifically for 12-18 year olds, culminated in world premiere performances of the five finalists’ works, on Wednesday 17 June at Perth Concert Hall. In partnership with the National Trust for Scotland, the first year’s Notes From Scotland invited young composers to write a short work for an instrumental trio, quartet or quintet.

This year’s Notes From Scotland was inspired by five National Trust locations around the country. The five finalists were selected by an expert panel and their compositions were performed and recorded by members of the Royal Scottish National Orchestra (RSNO) at Perth Concert Hall on Wednesday 17 June 2015.

The overall winner was Emma Ritchie, a cellist in Perth Youth Orchestra, and pupil at Perth High School. She received an iPad loaded with music software packages, VIP access to RSNO concerts and a year’s National Trust for Scotland pass.