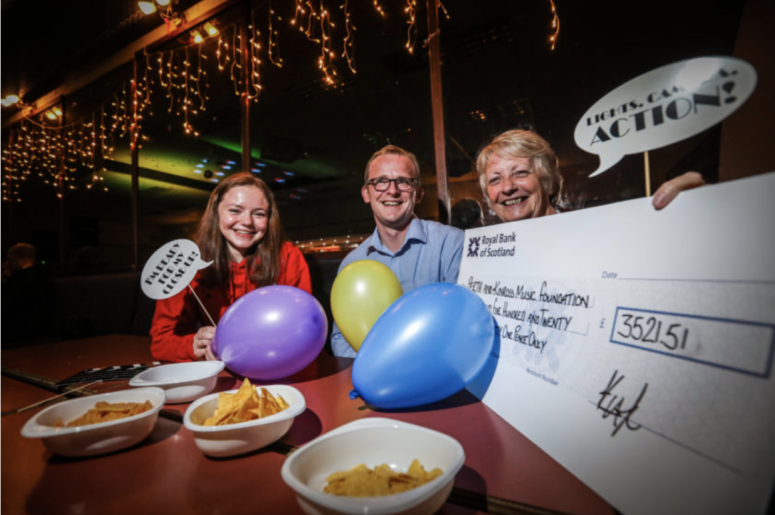 Perth City Operatic Group will now cease to exist, and their leftover funds have been donated to youth music charities in the area.

The Perth City Operatic Group has raised more than £10,000 for charities during its final farewell party.

The company was forced to wrap up their performances after 55 years due to dwindling attendance numbers.

Money raised from the event at the Tulloch Institute at the weekend will be evenly split to give  three charities supporting young musicians £3,500 each.

Holly Cammidge, of the Perth City Operatic Group, said the last performance was bittersweet. “It was a sad occasion but it was one we wanted to celebrate,” she said.

“It was a really nice evening.We made our donations to three charities to distribute the money in our account.

The three charities were chosen by members of the group themselves. They decided to donate the money to Perth Youth Orchestra, the Perth and Kinross Music Foundation and the Young Musicians Parents Association.

On choosing the charities, Ms Cammidge said: “It was decided at that we wanted to support up and coming musicians.

“All of our productions have had a live orchestra and we wouldn’t have managed without one, so we feel that this is giving something back.”

The opera group had to cancel its final show last autumn and was unable to form a committee at its annual general meeting in the spring.

They had previously put on a major show once a year but the pressures of doing this have become too great for the remaining organisers of the group.

Ms Cammidge said: “We had also recently tried to put on a production at Perth Theatre, like our sister organisation Perth Amateur Operatic Society have managed, but it proved too expensive.

“At our meeting in March, we couldn’t get enough people to form a committee so the group had to stop.”

On Friday night past members and their families and friends were invited to join the group to celebrate the 55 years of the opera group’s work. As the Perth City Opera Group said its final farewell, they remained grateful to everyone who supported them. Ms Cammidge said: “We would like to thank our audiences and members over the years for their support.

A spokesperson for the operatic group said: “It is with great sadness that we had to announce the closure of Perth City Operatic Group, a charity which has been a part of Perth’s performing arts scene since 1964 and welcomed many audiences over the years.

“Perth City Operatic Group’s AGM was held earlier this year and the final decision was made by its members to close the society. A decline in membership numbers and a lack of interest in the running of the society meant that this decision was forced to comply with the society’s constitution as it can not exist without a committee in place.

According to Perth City Operatic Group’s constitution, their remain funds were distributed among local youth music charities which have been chosen by the membership – including Perth Youth Orchestra and the Perth and Kinross Music Foundation.

“We’d like to thank our audiences and members over the years for their support.”

Responding on behalf of Perth and Kinross Music Foundation, Chairperson Mhairi MacKinnon said, “We are delighted to receive such a great boost to our funds but obviously saddened by the circumstances which sees the end of a great Perth institution.”

Speaking on behalf of Perth Youth Orchestra, President Susannah Rae said, “We were saddened to hear that Perth City Operatic Group was to close. PYO had many strong connections with PCOG and its closure is a great blow. Their most generous donation to the youth orchestra helps to secure our investment in our young players futures.”