Last week Perth Youth Orchestra held auditions from among its own ranks to select the soloists who will perform at its concerts over the coming months. Jenny Whitaker (trumpet) and Joe Pickering (clarinet) succeeded in impressing the adjudicators and now have just three weeks before they first step into their new leading roles, at the orchestra’s Annual Concert, on Sunday 10th April, in Perth Concert Hall. 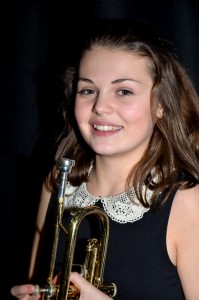 Jenny, a pupil at Kilgraston School, is also a member of the National Youth Orchestra of Scotland where she is its only female trumpet player. She started learning the cornet at the age of 8, adding the trumpet to her repertoire three years later. Jenny is also a talented singer and pianist. At weekends she attends the Royal Conservatoire of Scotland (RCS), in Glasgow, where she enjoys drama and musical theatre. But, inspired by the meteoric career of Alison Balsom, Jenny is taking her trumpet playing to the highest level and plans to pursue the instrument professionally.

Jenny’s trumpet tutor at Kilgraston, Mr Tom Smith, said, “Based on her natural talent, skill and perseverance I believe she would be an ideal candidate for the National Youth Orchestra this year and also has the potential to be considered for both the BBC Young Musician and Young Brass Musician Awards”. 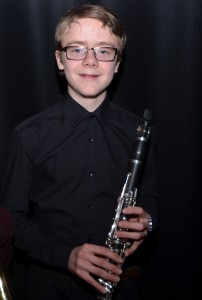 Fellow musician, Joe Pickering attends Kinross High School where is tutor his Mr Tim Mitchell. He follows in his big brother Magnus’ footsteps by becoming a soloist with Perth Youth Orchestra. Joe is the youngest of three brothers and has grown up surrounded by music, especially jazz. He decided to play saxophone at age 7 to be different from his brass playing brothers. Now, as well as playing principal clarinet with Perth Youth Orchestra, Joe plays clarinet in various Royal Conservatoire of Scotland ensembles and played clarinet in National Youth Orchestra of Scotland Junior Orchestra last year.

Joe also has a passion for composition, and studies with Tom Butler at RCS. He was runner up in RCS Junior’s ‘Composer’s Crucible’ last year and is currently working on an orchestral piece and has ambitions to be a composer of film scores.

Congratulating both musicians, conductor Mr Allan Young, is looking ahead to the orchestra’s busy summer schedule. “After our Annual Concert and a series of engagements throughout the summer term, the orchestra is heading to the Czech Republic in July where plans are set for performances in Prague and the surrounding area.”

“Performing on the international stage is usually what musicians dream about at the peak of their career. These young artists are being given fantastic opportunities at the earliest possible stage”.

In recent years the orchestra, which was founded over 50 years ago, has toured to Estonia, Poland, Germany and Italy earning critical acclaim. In a breathtaking review, Michael Tumelty said, “their achievement was astonishing, cutting edge, the real thing….”. {The Herald}.

On their return to Scotland, the musicians continue their season with performances in Edinburgh and Perth. Once again they will be taking part in the Edinburgh Festival Fringe with a concert in the city’s historic Greyfriars’ Kirk.

Dazzling performances are in store for their audiences. Jenny will be performing the Andante from Haydn’s Trumpet Concerto in Eb, and Joe is playing Weber’s Concertino for Clarinet.